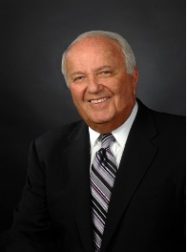 Richard L. Robinson is a fourth generation native of Denver. He attended schools in Denver, graduating from East High School, and then attended Colorado State University, graduating with a B. S. degree in Agriculture and was awarded an Honorary Doctorate in 2007 by CSU.

Richard was commissioned a Second Lieutenant in the U. S. Army after completing his college ROTC. He served on active duty for two years in the Field Artillery. He spent a majority of his time in Korea, where he was decorated with the Silver Star, Bronze Star and Purple Heart.

He served for many years on the Boards of several public companies: US Bancorp, based in Minneapolis, MN, American Land Lease, Horizon Organic Dairy, and US Explorations, Inc. He has chaired several civic and community organizations: Metro Denver Chamber of Commerce, CSU Board of Governors, Mountain States Employers Council, and Denver Area Council, Boy Scouts of America. He was also the initial Chairman of the Milk Processors Education Program that presents the Milk Moustache Ad Program.

Richard, an avid golfer, is a member of the Castle Pines Golf Club and Denver Country Club. He has been married to Marcia for 60 years and has two children, John and Ellen, and two grandchildren.

Richard and his brother Eddie formed the present Robinson Dairy in 1975, by purchasing the assets of Roberts Dairy for their operations in Denver. They sold the Company to Dean Foods in 1999. He also served as a member of the Management Committee of Consolidated Container LLC, an Atlanta based company. Dean Foods owned 25% of Consolidated and Richard represented them as a member.