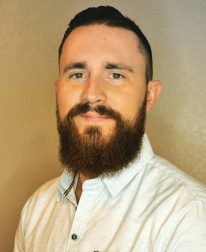 Jason is an Air Force Veteran of 6 years, and has worked for Employers Council as an Affirmative Action Specialist since 2013, managing and preparing Affirmative Action Plans for over 500 companies throughout the United States, mentoring and guiding each organization while keeping up to date with Federal and State statutes regarding Equal Opportunity, ADA, FMLA, and Sexual Harassment laws. In his spare time, he enjoys playing golf, and volunteering for a local large breed dog rescue called Save The Giants.