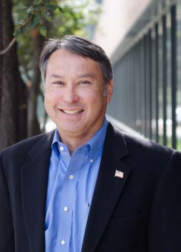 Christopher C. Sherry first joined Merrick & Company in 1985. Mr.Sherry is currently the Chief Executive Officer, President, and has been on the Board of Directors since 2003. His prior positions were Chief Operations Officer, Senior Vice President of Corporate Business Development and Marketing, Vice President of Corporate Support Services, and Business Unit Leader for the Facilities, Science, and Technology Business Unit. His prior experience includes three years as a supervisory civil engineer at Randolph Air Force Base in Texas in the 12th Civil Engineering Squadron. Mr. Sherry is a member of the Society of American Military Engineers (SAME) and the American Council of Engineering Companies (ACEC). He served on the Board of Governors of the Metro Denver Economic Development Corporation. He currently serves on the Board of Trustees of the Denver Area Council, Boy Scouts of America; the Executive Advisory Board of the Department of Civil, Environmental, and Architectural Engineering at the University of Colorado, Boulder; and the Advisory Board of Iron Woman Construction. Christopher Sherry received a BS in Architectural Engineering from the University of Colorado in 1985; and received an MBA in 2005 from the University of Denver.